Analyze and improve your trading with video trade logging software.

The video trade recorder plug-in for Metatrader platforms (versions 4 and 5) is designed for traders who take their trading seriously and are already logging their trades using traditional trade logs supplemented by screenshots taken during their trading.

Up till now traders were only able to use pictures of charts to illustrate their trades, because traditional screen recording software produced very large video files and were not able to record several charts simultaneously.

How is the Video Trade Recorder different from traditional screen recording software?

VTR uses a fraction of what is consumed by traditional screen capture programs.

Independent recording of up to 10 charts on each terminal. Even minimized charts!

The Video Trade Recorder enables background recording of up to 10 independent charts on each terminal across multiple MT4/MT5 platforms (including charts that are minimized or work in the background of other charts on Metatrader platforms).

The software incorporates state of the art, on-the-fly XVID video encoding, plus inactivity time compression to produce clear motion video images of charts while maintaining the smallest possible file sizes. Two recording modes are supported by the software and the resulting video files can be played back directly in Windows Media Player. Recorded videos are stored in separate recording folders corresponding to various instances of your MT4 and MT5 terminals. Folders are accessible directly from the recorder software for ease of navigation. Video files have specially formatted names for easy recognition (see recording modes for details).

When utilizing XVID encoding, the recording’s quality can be controlled directly from the Xvid Configuration panel. You may also choose to disable XVID encoding for the highest fidelity of the recorded material.

You can view a sample recording (800×600 pixels), which was captured using the “trade event-driven” mode and uploaded to YouTube.

For best results please ensure you are viewing the video using the full 480p quality and full screen mode.

You can also download another sample video (in the original form) showing a different trade. The video shows an 8 minute long trade, which was recorded using 800×600 picture resolution (the file size is 0,6 MB) 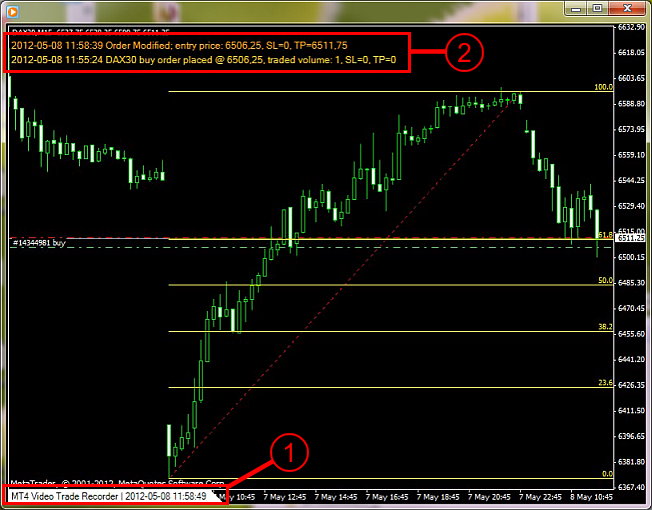 The recorder superimposes the following information directly on the video material: