Renko charts utilize real tick data available directly from your broker’s servers, which results in extremely accurate charting compatible with all of the major markets such as Forex, Stocks, and Futures. Combined with various Renko mode presets, chart synchronization, plus three open-source trading robots, make this the only Ultimate Renko package you will ever need for your MT5.

The Ultimate Renko indicator for Metatrader 5 is an all-in-one package compatible with on-chart trading.
The renko charts are very responsive and accurate. They are built entirely from tick data provided by the broker.

You can use of of the five renko presets or create a personal renko variation. 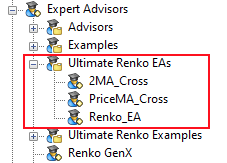 Renko EA is a robust trading robot specially designed for renko trading. You can precisely tune the entry & exit signals to your individual needs, which are different for each trader. The EA offers several filters for refining the entries and exits. You’ll also find basic trade management functionality.

The 2 MA crossover EA trades on the crossings of two moving averages. You can set the trading direction for longs, shots, or both.

The price & MA crossover EA works similarly to the 2 MA crossover EA, but in this case, the trading is done when price action crosses the moving average.

The SDK serves the creation of trading robots and additional indicators for the Renko charts on Metatrader 5.

Ultimate Renko indicator bundled with three examples of EAs (fully documented in the source code files) that will help you build your MQL5 trading robots for the renko charts created by the indicator.

The Renko Generator leverages custom symbols on the MT5 platform and prints renkos instead of regular time-based charts. The user can add any MT5 compatible indicator onto the renko custom symbol and use it to conduct technical analysis. You can add templates and attach EAs.

Please note that custom symbols on MT5 are not tradable by design. All trading needs to happen on the tradable symbols. This can be bypassed – more info here.

Here is an example 20 point renko chart displayed as a custom symbol:

The Ultimate Renko bundle offers the combined features of both the indicator and generator versions.

What is the difference between the Renko Indicator and Renko Generator?

The main difference is in the way the charts are displayed. The indicator version presents the renko chart as an overlay on top of a time-based chart enabling “on-chart” trading. The generator builds and updates the renko chart on an MT5 Custom Symbol. Custom symbols are not tradable in MT5. You would need to place and manage your orders on a time-based chart while analyzing the renko custom symbol.
​
The indicator version also offers many additional features, plus it includes three renko EAs with source code, so you can modify and tune the trading robots to your specific needs.

Is the license lifetime?

Yes. You are purchasing a lifetime license for a one-time licensing fee according to the pricing options specified above.

Can I use two renko box sizes at the same time?

Not on a single chart, but you can place the renko indicator (or renko generator) on two separate charts with different settings. For example, you can have a 30 pip renko box size on one chart and a 10 pip renko box on a different chart.

How do I clone the settings from UniRenko?

The formula for calculating the correct settings for UltimateRenko from the values on a NinjaTrader UniRenko chart (T, R, and O)

The settings calculator/converter can be found here.